After leaving Los Cusingos, we continued our Costa Rican trip by birding along roads, where we saw more of the countryside, including the ubiquitous cecropia trees with their beautiful leaves. We had heard that some of the banana plantations had become diseased and were replaced with sugar cane; this apparently happened in the 1950s when a fungal disease, Fusarium wilt, affected banana crops. Bananas are still a major crop and many small homesteads along the road had a banana tree in the yard. And these fruits were very popular at the bird feeders. 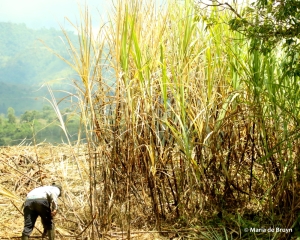 The day before, we had seen sugar cane growing in various places; the varieties in this country are tall perennial grasses. Farmers were cutting some down with machetes in various places as we traveled and we saw trucks and tractors laden with the crop going to processing plants.

These plants were right beside the roads we drove along. 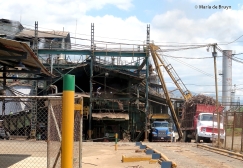 In one area, we crossed a fairly dry river with the remains of a twisted metal bridge on one of its banks – apparently, the result of Tropical Storm Nate which left the country with several fatalities and lots of 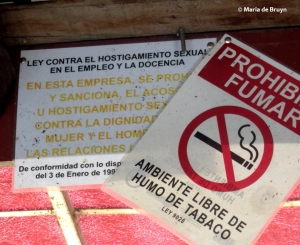 We stopped for lunch at an open-air restaurant with signs advising that both sexual harassment at school and in the workplace, as well as smoking, were forbidden. We could see birds flying by in a valley overlooked by the restaurant veranda, which was a nice touch.

A fair amount of time was spent looking at shorebirds enjoying the water at the San Isidro sewage lagoons. This was not my favorite spot – it didn’t smell bad but the lighting was awful, the birds were far away behind fences that I couldn’t photograph over or through very well. I did manage a photo of a mangrove swallow (Tachycineta albilinea) zipping over the water in the distance. The photo of the variable seedeater (Sporophila aurita) was in dense shrubs and then I over-compensated – but you can see the male is black with a white mark at the neck and the females are brown. 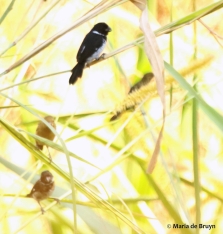 A great kiskadee (Pitangus sulphuratus) perched in a tree and on a wire not too far away. 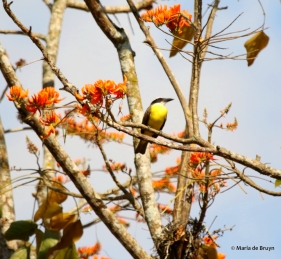 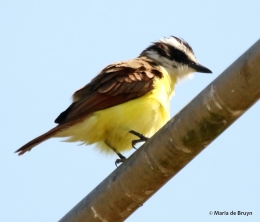 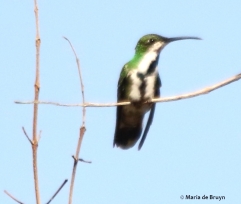 At another roadside stop, I spotted a nice dog who was resting in a hole in the bank of a creek. At first, I thought he was clever to find a cool spot but then I felt badly for him when I saw he was chained.

A restaurant at one stop turned out to be older than me, which was a nice observation.

The roadside birding was often on a hilly road and we could see villages below. 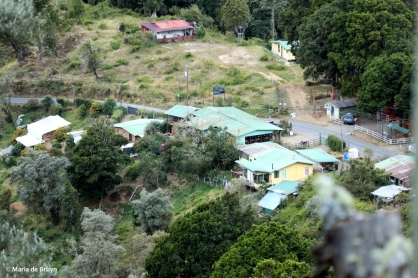 In the dense foliage, we saw a dark-capped flycatcher (a very small bird, Empidonax atriceps) sharing a shrub with a euphonia. The yellow-thighed finch (Pselliophorus tibialis) fortunately came out in the open – this bird became one of my favorites.

My photo of the long-tailed silky flycatcher didn’t turn out well and I got a better photo later; this was compensated for me by the sooty thrush (Turdus nigrescens), who posed nicely for a long time on a lichen-laden branch. That was a nice way to end the day as we made the last miles to our next hotel for two nights, the Sueños del Bosque cabins where the bathroom was decorated with flowers on the toilet seat, sink drain and shelves. Next instalment coming soon! 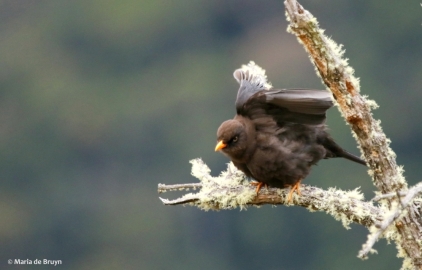 2 thoughts on “Costa Rican rambles 6B – On the road”